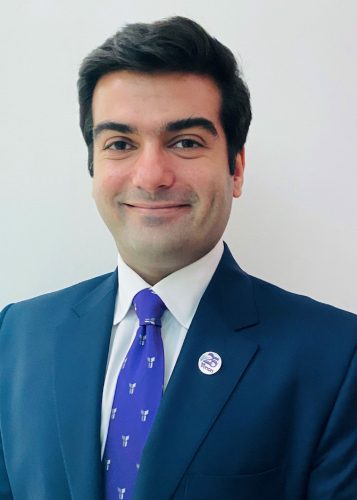 Anuj Rajain is the Chief Executive Officer (CEO) of Soteria, one of India’s leading remote surveillance solution providers. The young, dynamic Yale alumnus is responsible for the creation and implementation of the organisation’s overall growth strategy.

Anuj Rajain, being the founder, plays a key contributing role in ensuring 100% growth of Soteria in terms of client base and team size. Today, Soteria Command Centre monitors 3000+ critical facilities across India and has actively deterred 5000+ incidents. Anuj led Soteria to become an active partner of the largest gold loan companies in India facilitating their transactions safely and securely.

Anuj is a progressive thinker who takes the long term view for a focused and planned growth of the organisation, in terms of both business visibility and market share. Under his able leadership, Soteria has been awarded Outstanding Security Installer-Integrator Award by OSPAs in 2021.

Having worked with some of the leading brands such as Belmond and Deutsche Bank, Anuj adds a tactical dimension to his diverse profile. He joined Tenon Group in 2013 as a management trainee when he undertook multiple projects which defined the growth trajectory for Tenon Group. He launched Soteria Command Centre in 2014 after identifying the need for centralized command & control centre for thriving yet vulnerable businesses.

Anuj has been actively involved in the business growth and expansion of Tenon Group’s security business in Singapore. Within 4 years, Anuj was promoted to Country Head for Peregrine Security Singapore. His achievement as the Country Head can be best exemplified with the increase of 35% in turnover of Singapore businesses.

The accelerated progress of Soteria & Peregrine Security Singapore is attributed to Anuj’s innovative style of functioning and out-of-the-box thinking. He strives to reinvent the traditional landscape of security and facilities management into smart and more efficient industries that support tomorrow’s high-performing businesses.

He brings with him exemplary understanding of the domestic as well as international market and good business acumen. An intense, driven personality, Anuj wants to reinvent the landscape of security and facilities management. He, with his fresh ideas and young blood, aims to continuously broaden Tenon’s horizons in India, UK and Singapore, along with having a global impact and relevance. In recognition of his increasing contribution to the IFM & Security Industry, he has been featured in the Elite #BW30UNDER30 List of Young Achievers in 2021 by BW Disrupt.

This objective of Anuj led him to become the youngest leader to be invited to Forbes Global CEO Summit 2020. He is also one of the youngest Indian leaders to adopt A.I. technology for driving security and facility automation.

Youth upskilling and employment is a philanthropic priority for Anuj. One of his projects in this area includes Soteria’s association with the only licensed drone academy in India where youths are trained free of cost. With Anuj at the helm of the organisation, Soteria is also associated with one of the largest conglomerates for on-boarding technology for maximising employee productivity and safety. The costs saved are invested in employee training and upskilling.

Presently, Anuj is actively involved in developing programmes aimed at developing future leaders in his industry/community.